The luxury of silence immersed in nature

A rich botanical garden, a “natural” swimming pool and a vegetable garden with Mediterranean herbs.

A lush botanical garden, a thermal swimming pool and a vegetable garden with medicinal plants, aromas, smells and vegetables: this is the park of the Country Boutique Hotel Donna Coraly.

5000 square meters of nature, accessible directly from some private gardens of the suites: a corner of paradise where silence and tranquility reign. The ideal place to regenerate, relax and enjoy the scents and colors of the most authentic Sicily. 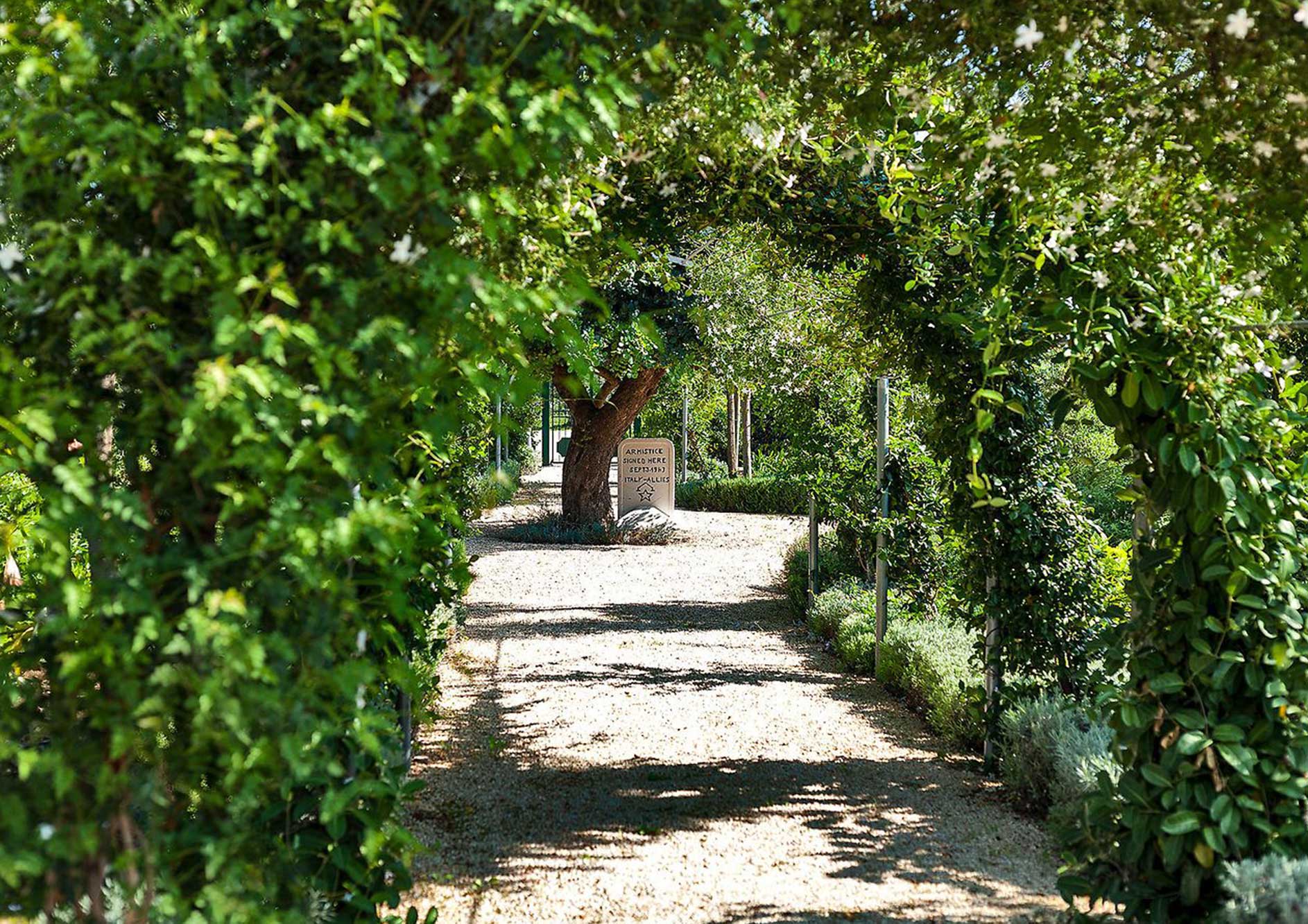 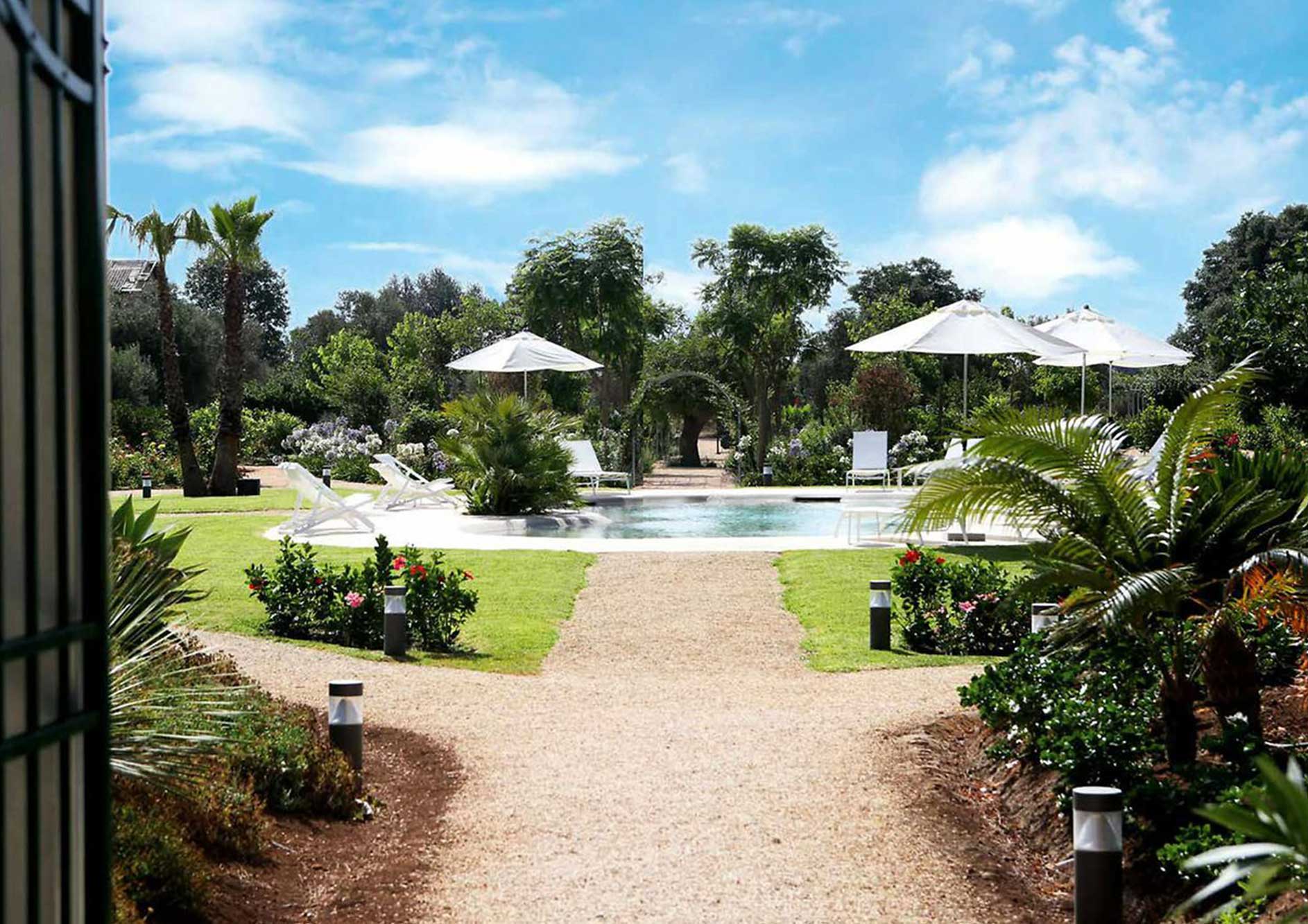 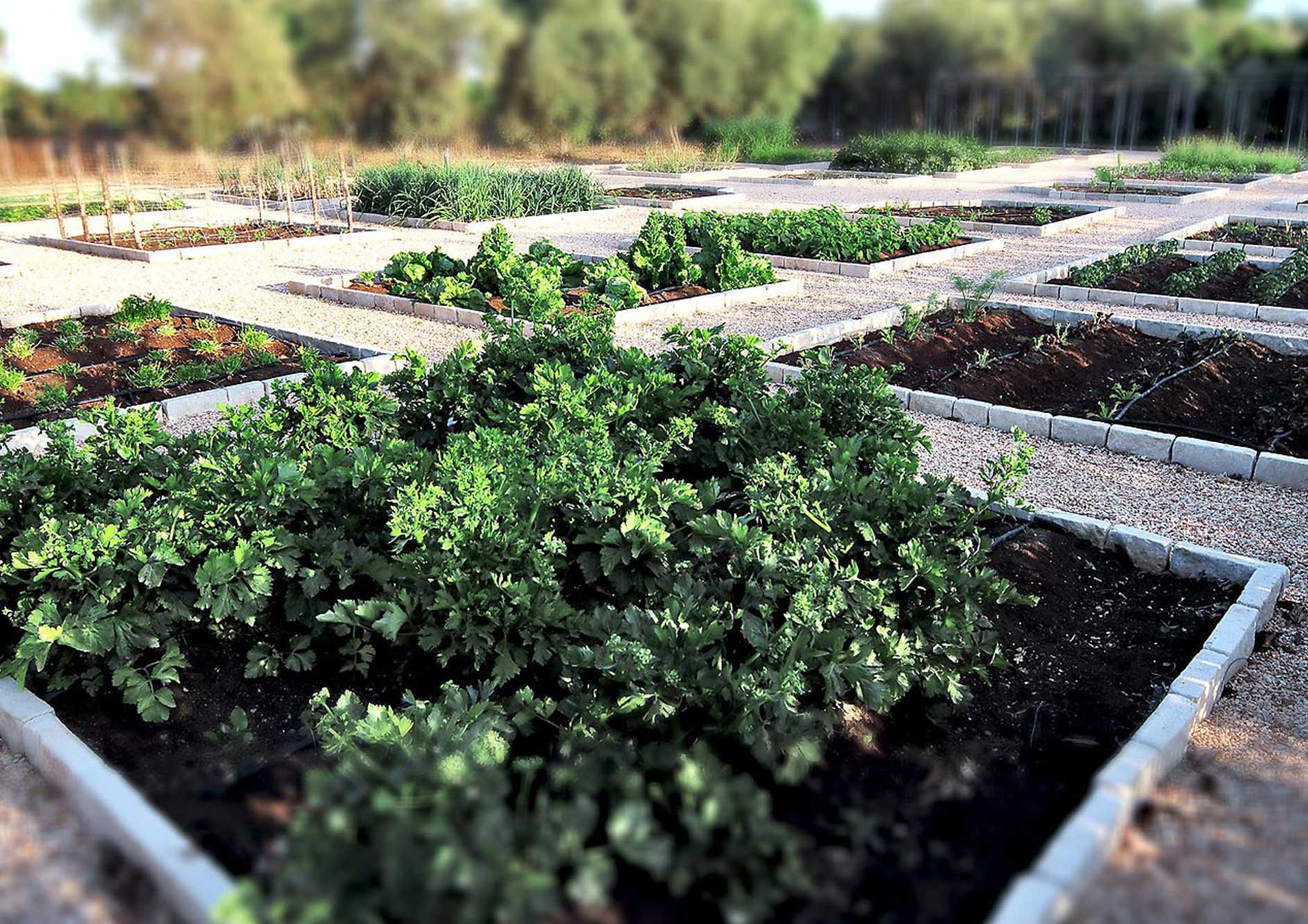 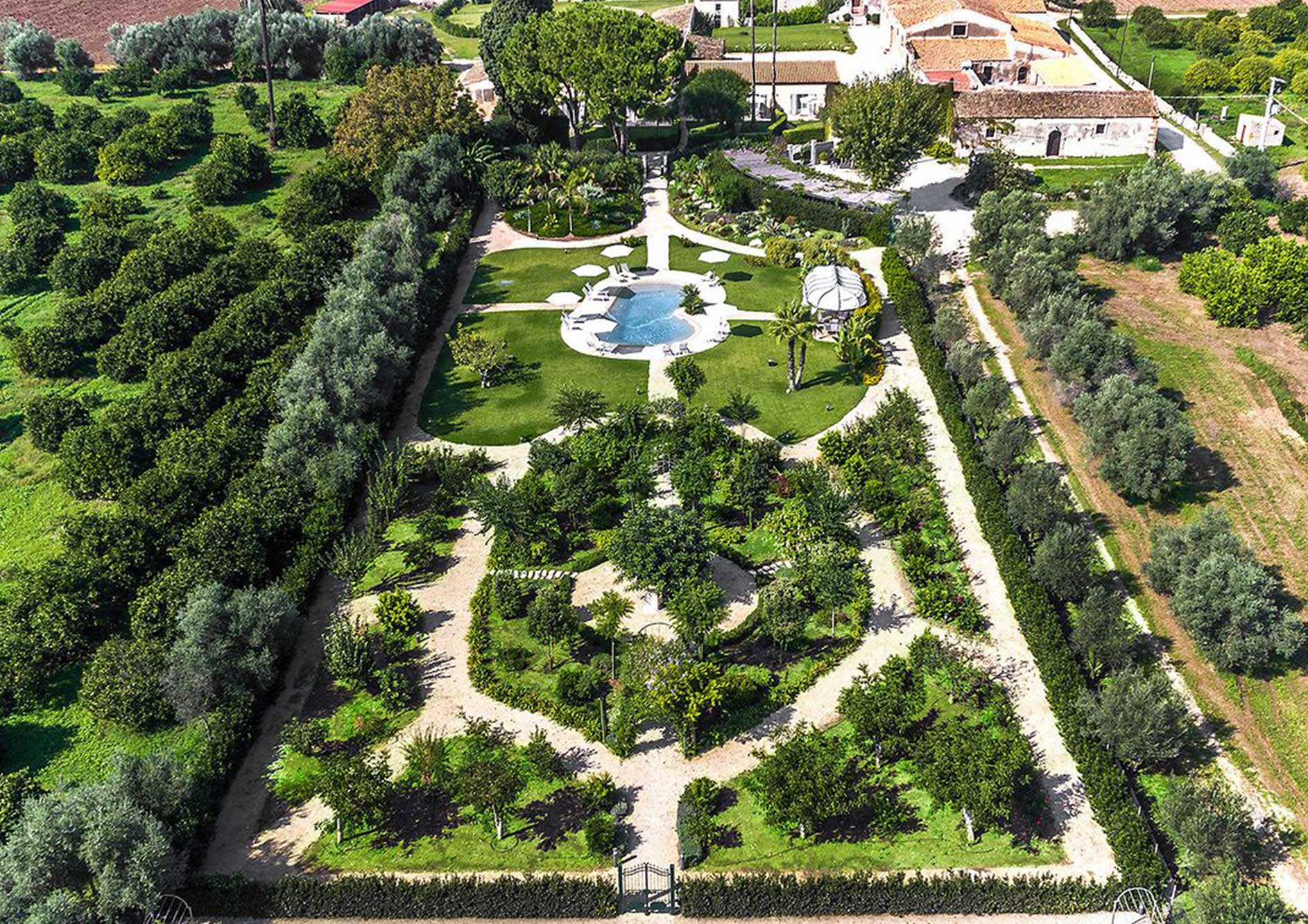 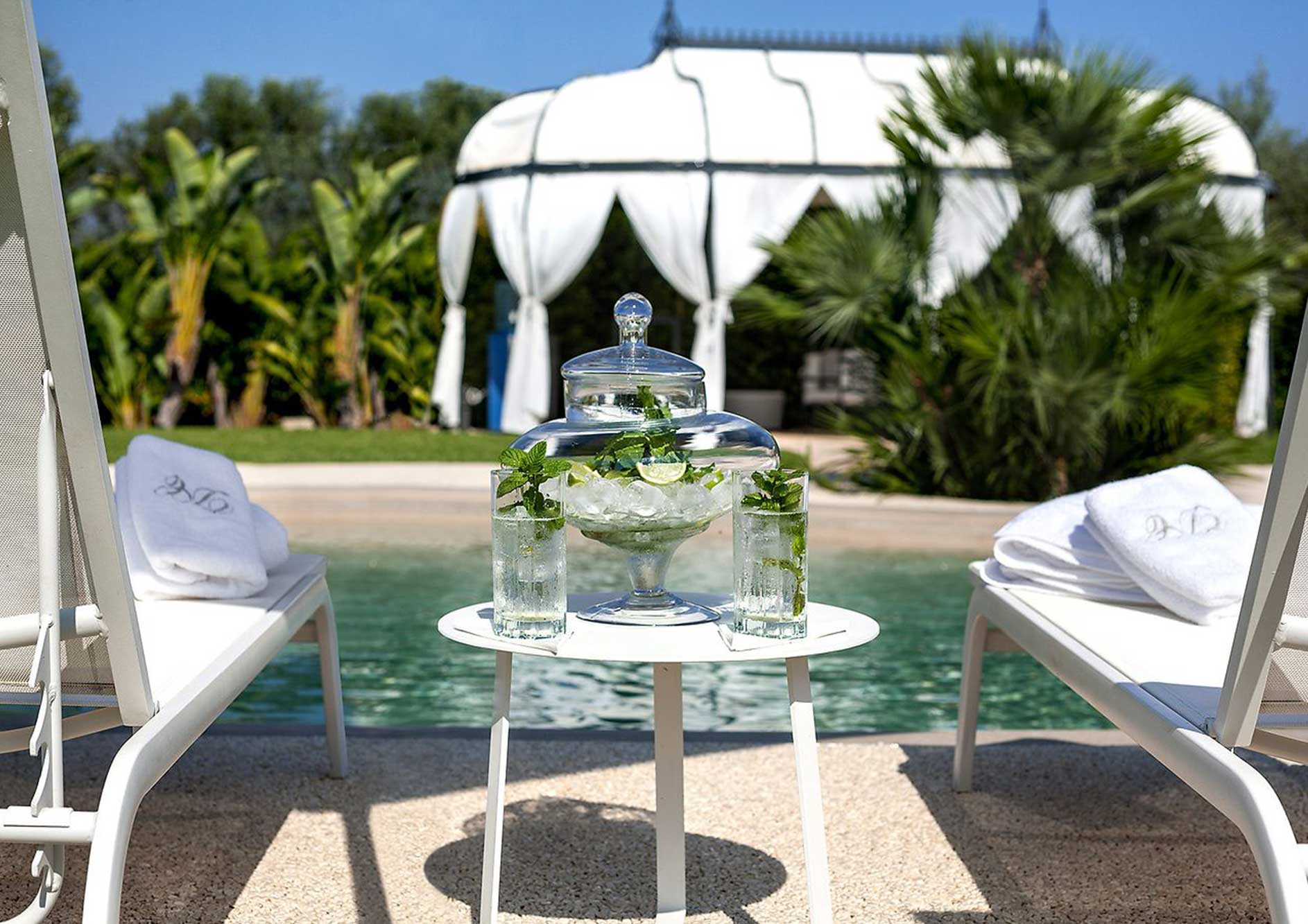 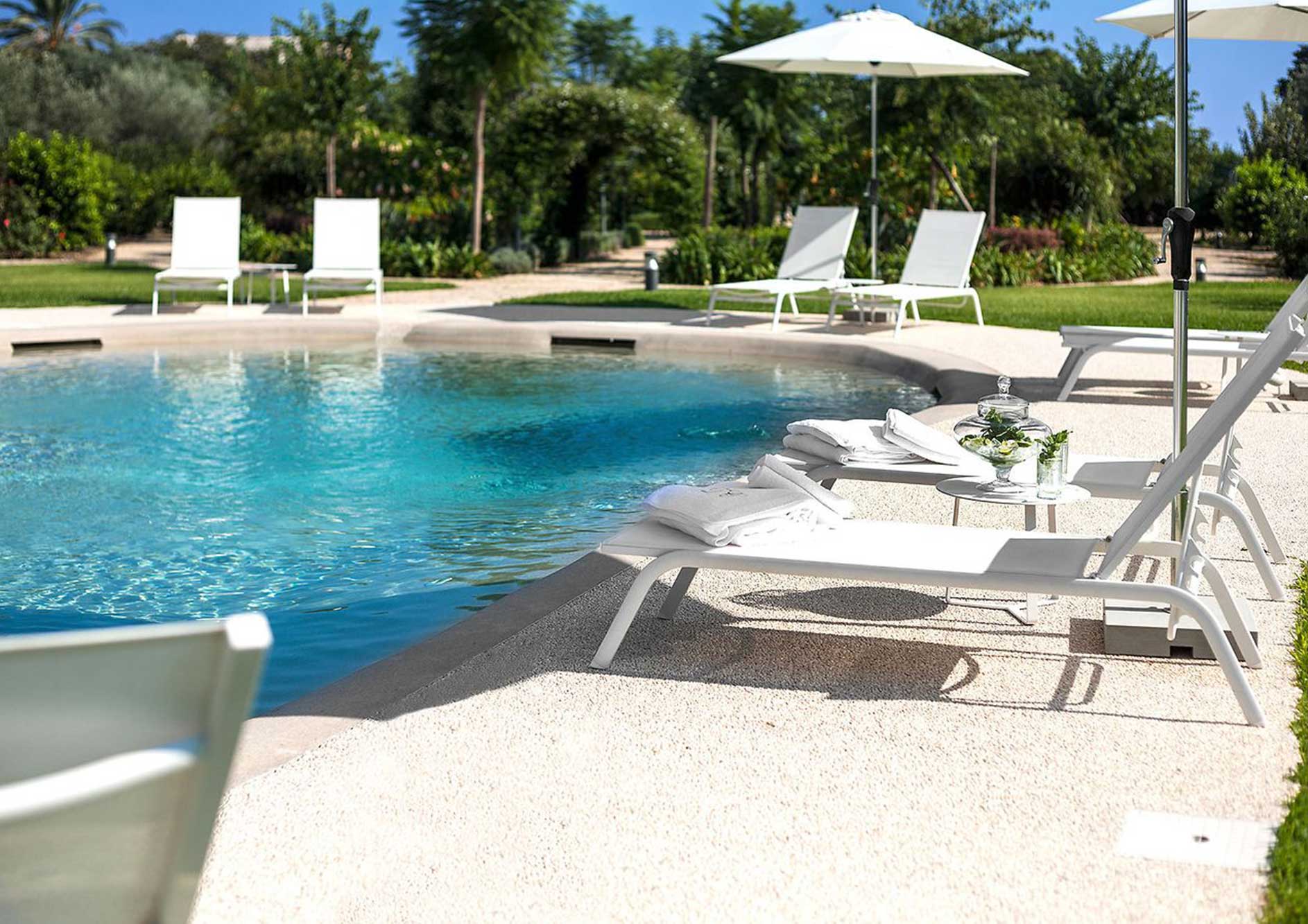 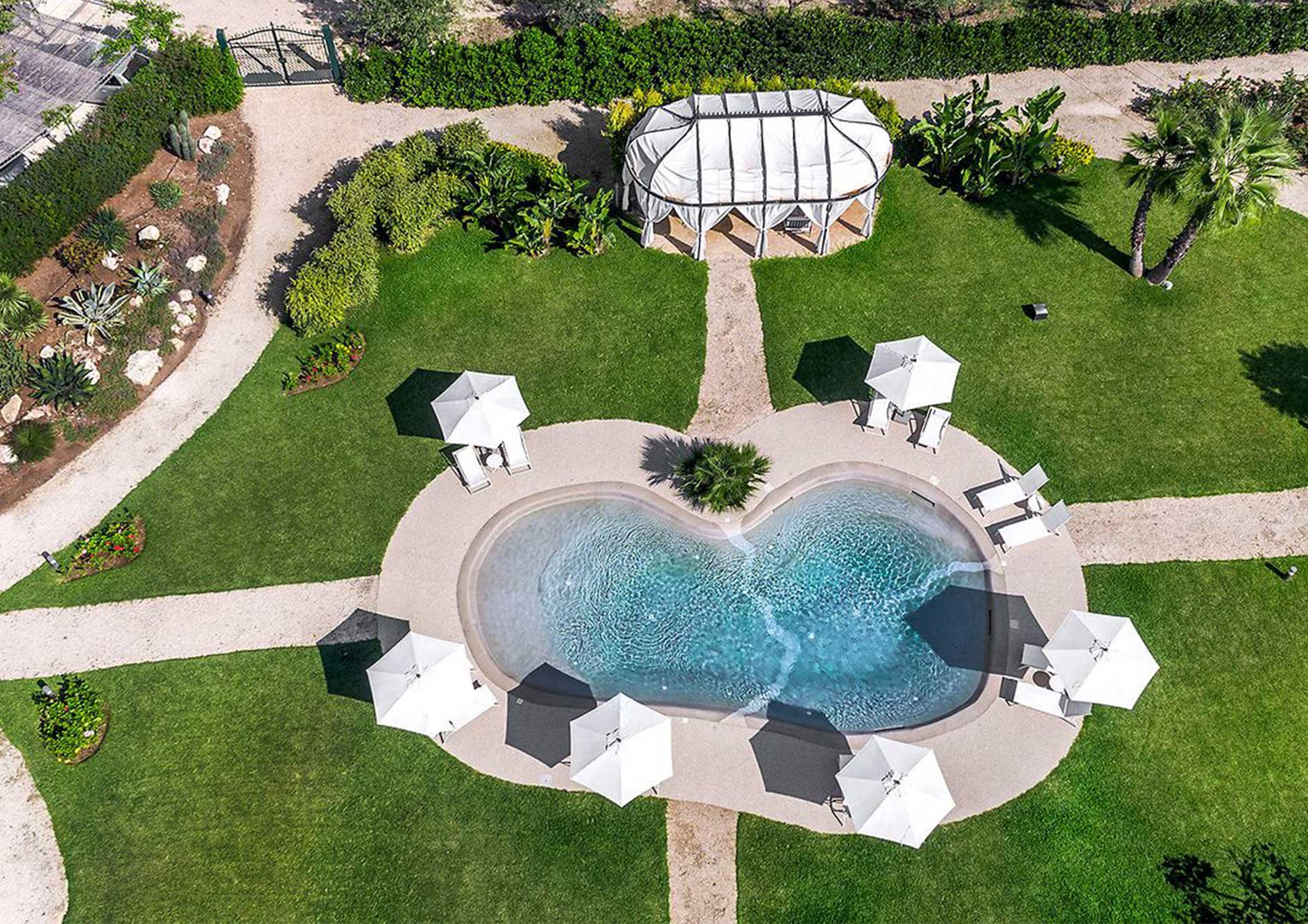 The park of Donna Coraly is a precious jewel.
Rare and peculiar plants such as “Buddha’s hand” and “citrus caviar” grow harmoniously near the quince, which is typical of Sicily,
and the more tropical mango and avocado trees, up to jujube, arbutus and pomegranate.
At the center of the park stands an ancient carob tree, a symbol of the Mediterranean and in particular of south-eastern Sicily, evoked by the poet Salvatore Quasimodo in a nostalgic poem about his land, when he says: “I have forgotten the sea, the serious shell blown by Sicilian shepherds, the chants of the carts along the roads where the carob tree trembles in the smoke of the stubble…”.
Next to it, we find the memorial stone in memory of the armistice that confirmed the surrender of the Italians in 1943, evidence of a history that is still alive, of which this estate was the protagonist.
The garden advances, then, among citrus and fruit trees that lead to the hortus conclusus, where vegetables and aromatic plants are cultivated to offer the guests of the resort fresh and organic products. 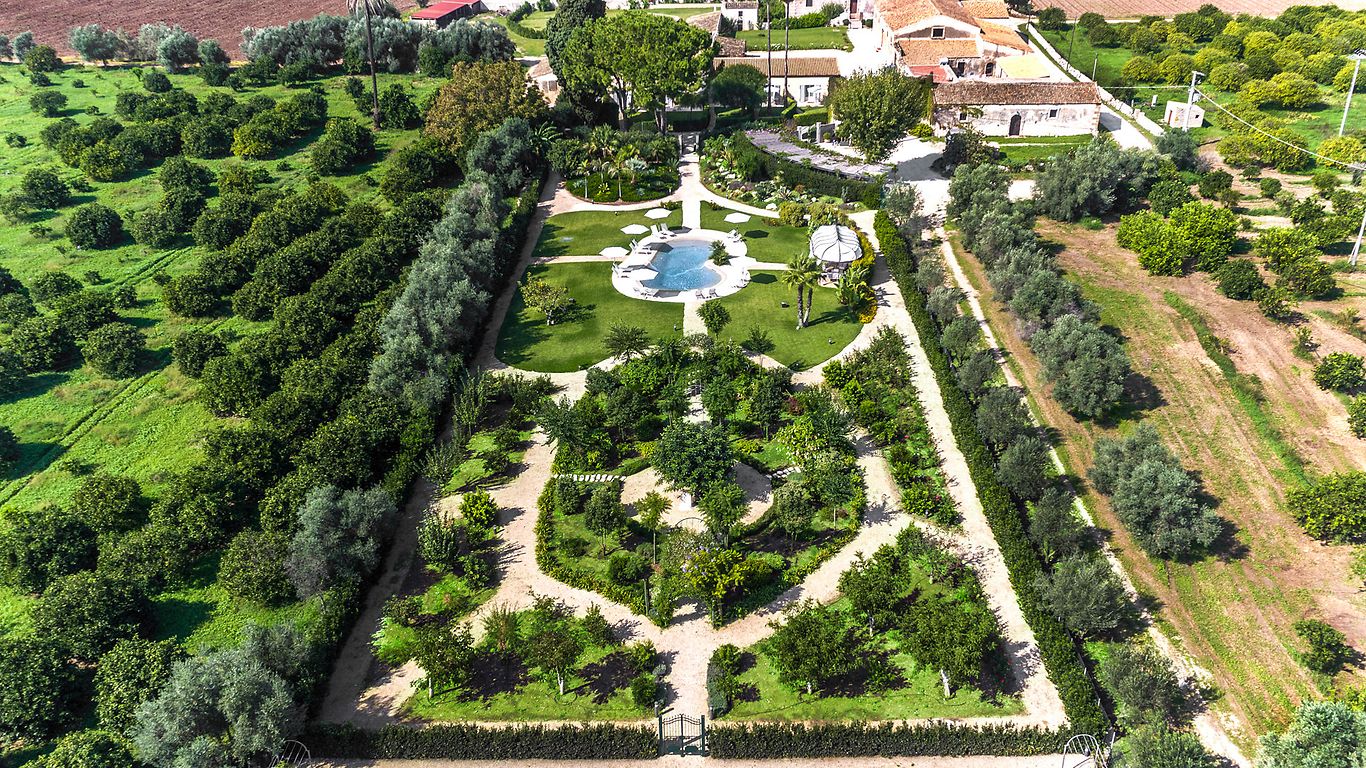 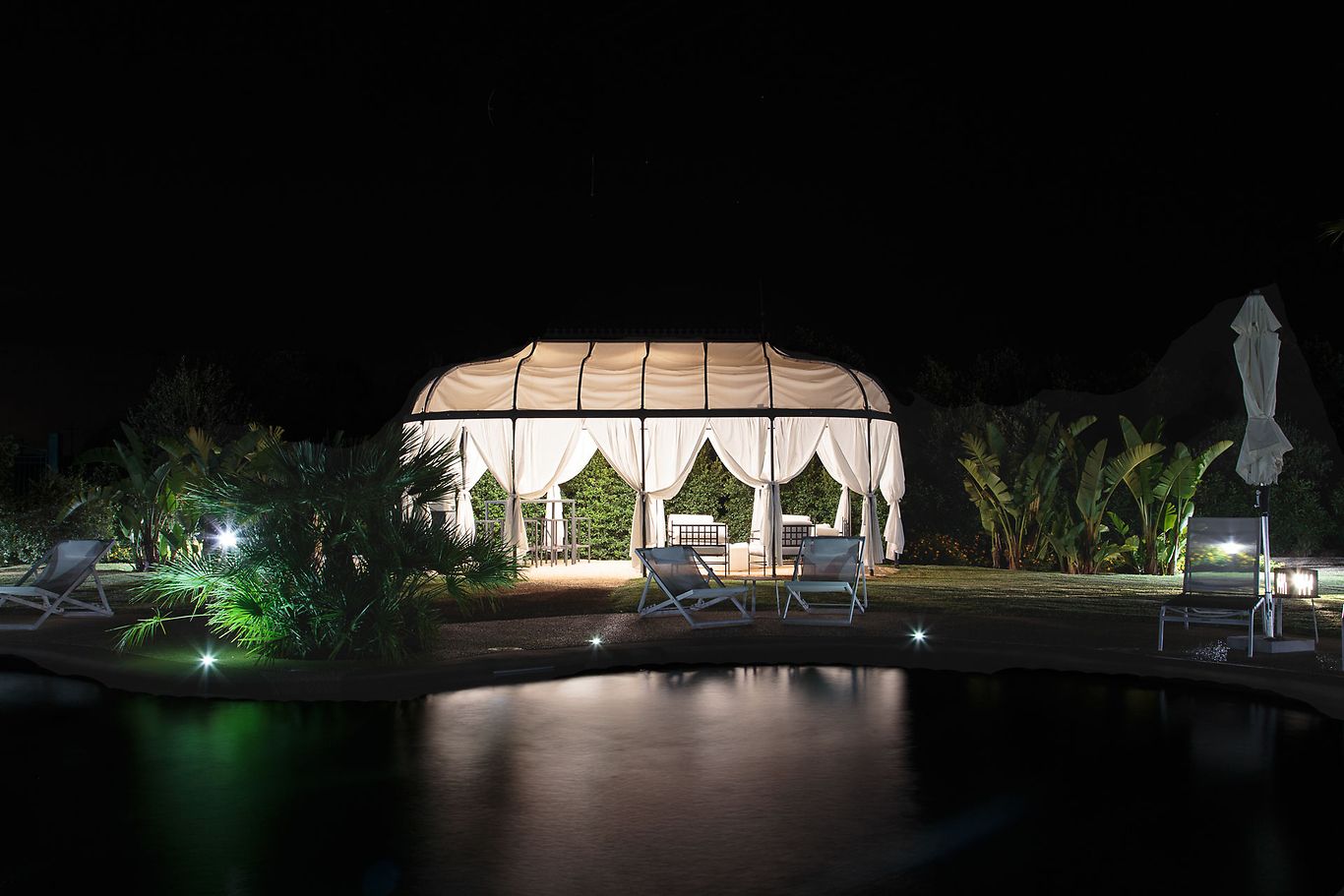 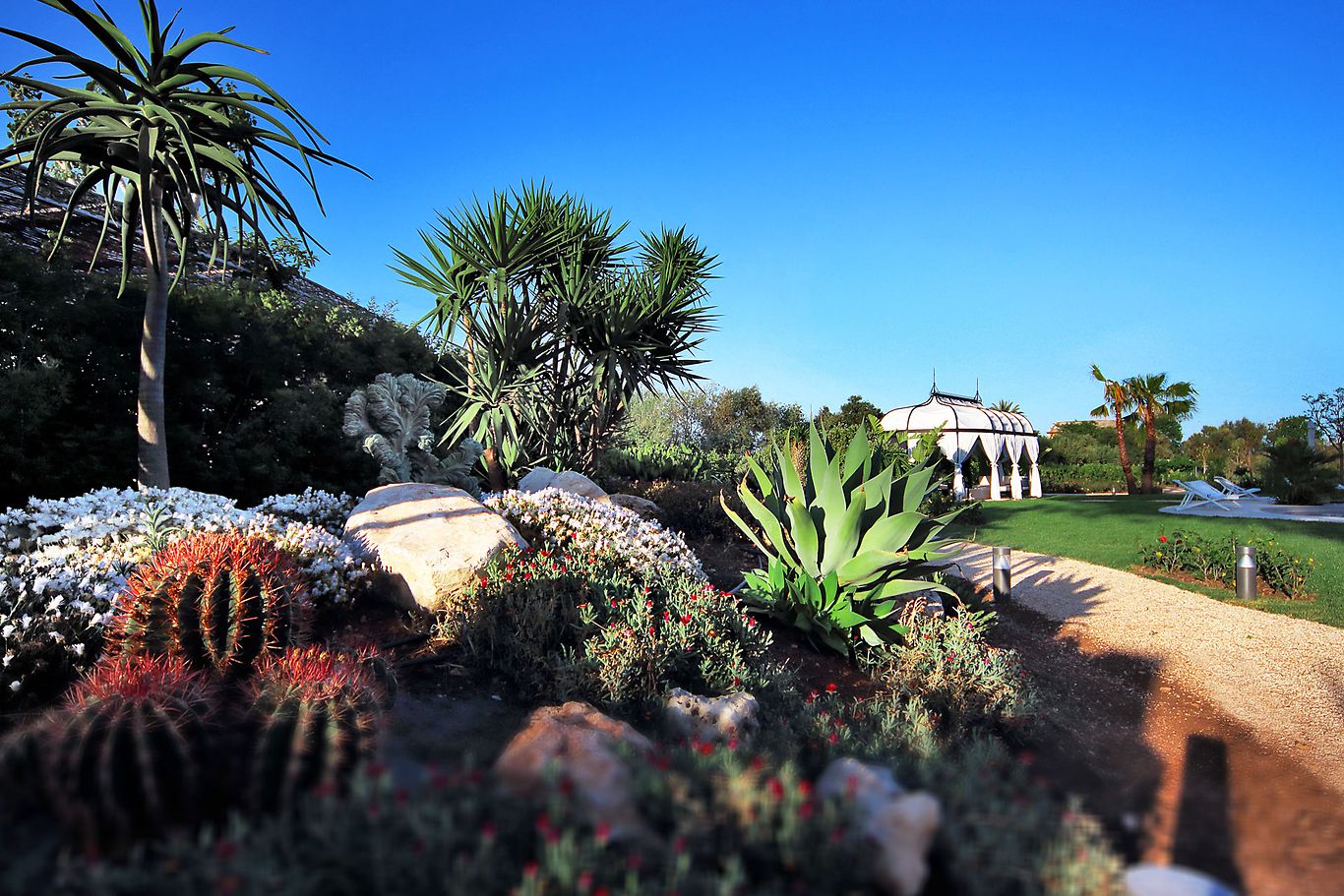 A spectacular view of the botanical garden.
A large park full of plants, flowers and herbs where silence and quiet reign.
There are many tropical specimens: palmaceae, succulent cactaceae that coexist with fruit trees, olive trees, citrus and decorative plants, such as Jacarande and Bahuiniae Purpuree, interspersed with pergolas of roses and jasmine that give fragrance to the air.

Relaxation and nature by the pool
The hotel’s swimming pool is heated and sanitized with the “salts of life”. These are mineral salts and oligo-elements that, dissolved in the water, reproduce the healthy qualities of thermal waters, bringing considerable benefits. The absence of chemical chlorine and the use of a natural filtration system offer the possibility of bathing immersed in a natural ecosystem completely integrated with the surrounding area.

The water is heated during the coldest periods, always respecting the correct biological balance of the basin.

Tables and comfortable chairs in the solarium area by the pool allow you to enjoy the Sicilian sun and the seductive calm of this place. The presence of a gazebo provides ample space for shade and privacy.

All the catering and assistance services of the hotel are also available.
A real corner of peace surrounded by nature that surprises every guest in search of wellness and relaxation. 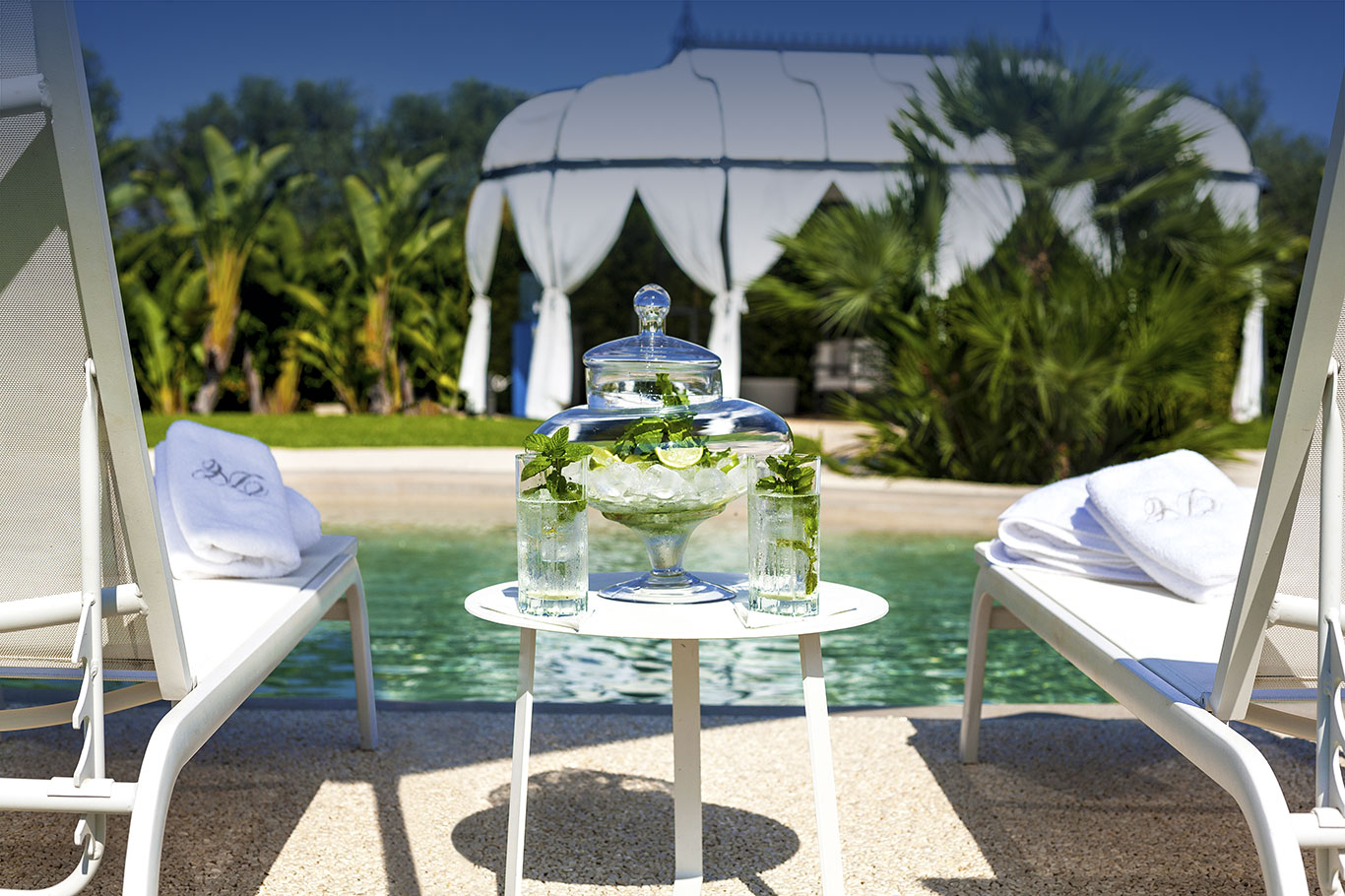 Inside the botanical garden, there is the biolaghetto that stands out with its vivid blue color: Inside the botanical garden emerges, with its note of blue color, the biolaghetto: a delightful swimming pool with jacuzzi in which to bathe and relax in peace, totally surrounded by the nature of the garden, which is rich in rare plants, tropical specimens and aromatic herbs.

The organic vegetable garden is located in a perfect position for the cultivation of tasty and vitaminic vegetables and delicate aromatic herbs typical of the Mediterranean and Sicily. The garden is open to guests: you can walk around it, being surprised by the scents and aromas of each plant.